Experience one of Shakespeare's most beloved comedies like you've never seen it before! Join five actors from London's most prestigious stages as they bring to life every role in this family-friendly tale of love and mischief. Featuring the legendary sparring of Beatrice and Benedick, Much Ado About Nothing marries hilarity with meditations on honor, shame, and deceit. Shakespeare’s celebrated battle of the sexes carries you on a journey from antagonism to love with humor and a whole lot of negotiating! Three performances only!

All performances at 7:30pm at Notre Dame’s Washington Hall

Based in London, England and produced on campuses throughout the nation by Shakespeare at Notre Dame, AFTLS sends a new self-directed ensemble of five professional actors to the United States twice a year to universities across the nation.  Actors From The London Stage, whose members hail from such prestigious theater companies as the Royal Shakespeare Company, the National Theatre of Great Britain and Shakespeare's Globe Theatre, has called Notre Dame its American home since 2000. 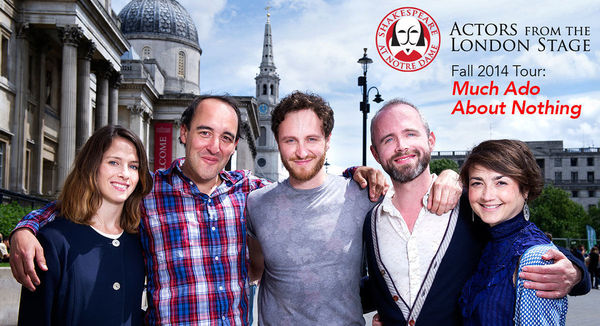