From January 6 through January 30, 2016, the University of Notre Dame hosted an exhibition of William Shakespeare’s First Folio. 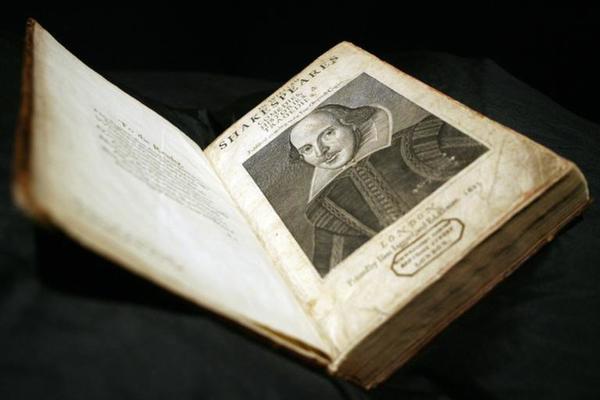 One of the world’s rarest and most treasured books, the First Folio is the first collected edition of Shakespeare’s plays. It was displayed in Notre Dame's Hesburgh Library during a nationwide traveling exhibition entitled “First Folio! The Book that Gave Us Shakespeare,” sponsored by the Folger Shakespeare Library in partnership with the Cincinnati Museum Center and the American Library Association and hosted by Shakespeare at Notre Dame.

The exhibition, announced by the Folger Shakespeare Library on Thursday (April 23), Shakespeare’s 451st birthday, was one of numerous events planned worldwide for 2016, the 400th anniversary of Shakespeare’s death.

When it was published in 1623, the First Folio could be purchased for 20 shillings, roughly $200 today. Since then it has become one of the most valuable printed books in the world; a First Folio sold for $6.2 million in 2001 at Christie’s and another one for $5.2 million in 2006 in London.

In the Notre Dame exhibition of the First Folio, the book’s pages were opened to the most familiar of all Shakespearean lines; “To be or not to be” from Hamlet’s soliloquy. The exhibition included digital and interactive features on Shakespeare’s life, times and work, and several public events presented by Shakespeare at Notre Dame including the 2016 annual meeting of the Shakespeare Theatre Association (STA).

To celebrate the 400th anniversary of Shakespeare's legacy (1616-2016), the ribbon cutting ceremony will take place at exactly 16:16 on 1/6/16, a numerical tribute to the enduring impact his words and works have had on our world for four centuries.

Guided tours of the First Folio exhibit will be offered daily by Hesburgh librarians and curators at the following times:

Tours will meet by the entrance to the Rare Books and Special Collections Department (102 Hesburgh Library, first floor). Reservations are not necessary. If you are planning to bring a group, please feel free to alert the Hesburgh directly about your visit: rarebook@nd.edu or 574- 631-0290. Times are subject to change. Please consult the Hesburgh's Rare Books and Special Collections Website prior to your visit.

All four 90-minute lectures are free, open to the public, and located within the Hesburgh Library.

As part of "First Folio! The Book that Gave Us Shakespeare," Shakespeare at Notre Dame will be offering a series of workshops to students, teachers, and families. Please email General Manager Debra Gasper at dgasper@nd.edu or call 574.631.2273 to learn more about available sessions and times.

Published on Jan 7, 2016 by the University of Notre Dame's College of Arts and Letters

At exactly 16:16 (4:16pm) on January 6, 2016, our “First Folio! The Book that Gave us Shakespeare” exhibit curated by the Folger Shakespeare Library, opened at the University of Notre Dame with a special ribbon-cutting ceremony featuring John McGreevy, dean of Notre Dame's College of Arts and Letters; South Bend Mayor Pete Buttigieg; Diane Parr Walker, Edward H. Arnold University Librarian, Hesburgh Libraries; the Rev. John Jenkins, president of the University of Notre Dame; and Scott Jackson, executive director of Shakespeare at Notre Dame. “First Folio! The Book that Gave us Shakespeare” is a 50-state tour and exhibit of Shakespeare’s 1623 First Folio, the first published collection of 36 of his plays and one of the world’s most treasured books. Notre Dame marks the official first stop of the First Folio national tour and serves as the sole Indiana venue for the exhibition. The exhibition, which runs Jan. 6-29, will be housed in the Rare Books and Special Collections gallery of the Hesburgh Library. Select Notre Dame Shakespeare holdings will also be on display, and curators will offer daily, guided tours.