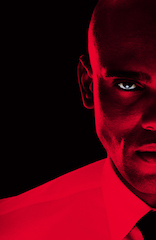 The Tragedy of Othello, the Moor of Venice

Passed over for promotion by General Othello, Ensign Iago embarks on a perilous emotional ruse: to convince Othello that his wife Desdemona is unfaithful, leading to the general’s most searing battle: against green-eyed jealousy.

A story of trust twisted into violence, and beauty lost to terror, Othello is directed in a contemporary staging by Cameron Knight (last year’s memorable Benedick in Much Ado About Nothing), and features Robert Ramirez as Iago, with stage and screen actor Esau Pritchett in the title role.

Get special offers, updates, and Shakespeare news from around the world: