For the first time in our history, NDSF added a second professional production in 2016 and saw a 30% increase in our total Professional Company attendance. 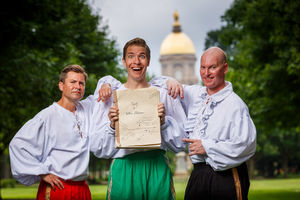 NDSF enlisted writers Austin Tichenor and Reed Martin, stars of the PBS film The Complete Works of William Shakespeare (abridged) and authors of The Complete History of America (abridged), to return to their Shakespearean roots and create a brand new madcap comedy inspired by the Bard. Performances of William Shakespeare’s Long Lost First Play (abridged) began August 4 in the DeBartolo Performing Arts Center’s Regis Philbin Studio Theatre. The run was extended through September 6. 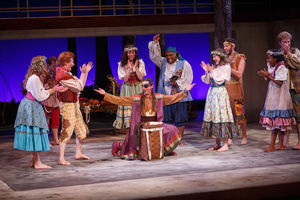 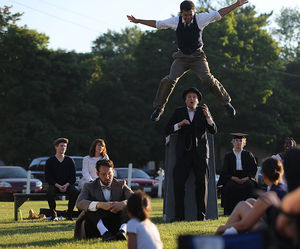 2015's Young Company production was Shakespeare's comedy Love’s Labor’s Lost, directed by West Hyler, in his second summer leading these early-career artists. Hyler is best known for his work on Broadway, including Jersey Boys and How the Grinch Stole Christmas. This free 90-minute production was performed all over Northern Indiana and Southwestern Michigan. If you'd like to help bring the Young Company to your town next summer, contact Audience Development Manager Aaron Nichols at aanichols@nd.edu.

Beyond the Stage events took place before the opening of the Professional Comapny and Young Company produtions. Audiences heard from Festival directors, designers, and cast members while getting a first look at production sets, costumes, and music.

Finally, on July 18 and 19, 2015, actors of all ages and from all over the region gathered to perform Shakespeare's "greatest hits. Congratulations to our Community Company of ShakeScenes. Thanks to Coordinating Director Christy Burgess for creating a magnificent free weekend of Shakespeare.

Since its founding in 2000, the Notre Dame Shakespeare Festival has grown dramatically from a daring experiment to a celebrated campus tradition that furthers the mission of the University. As the professional theatre in residence at the University of Notre Dame, the Notre Dame Shakespeare Festival's Professional Company presents world-class productions while fostering young theatre artists through unique educational production and performance opportunities such as our Young Company and ShakeScenes programs.

Today, housed in the dazzling Marie P. DeBartolo Center for the Performing Arts and historic Washington Hall, we reach thousands of people each year with Shakespeare's timeless words.

Join our electronic mailing list to get the latest updates on all things Shakespeare at Notre Dame.