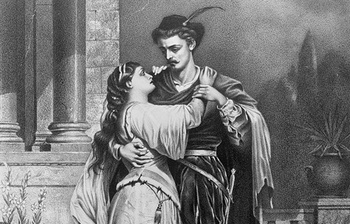 Set in the city of Verona, the play opens with an argument and a brawl between the servants of the feuding noble families of Capulet and Montague. The Prince, ruler of Verona, stops the fight and decrees that whoever disturbs the peace again shall be sentenced to death. Montague's son, Romeo, and his cousin, Benvolio, talk about Romeo's love for Rosaline.

Meanwhile, at the Capulet home, Paris, a kinsman of the prince, seeks Juliet's hand in marriage. Capulet dispatches a servant with a list of people to invite to a masquerade and feast that he holds every year. He invites Paris to the feast, hoping that Paris will begin to win Juliet's heart. Juliet talks with her mother, Lady Capulet, and with her Nurse about the possibility of marrying Paris. Juliet has not yet considered marriage, but agrees to talk with Paris during the feast to see if she will accept him as her husband.

Romeo and Benvolio encounter the Capulet servant bearing the list of invitations to the masquerade ball and, since Rosaline will be there, they decide to attend the feast with their friend Mercutio. Once inside the Capulet residence, Romeo sees Juliet from a distance and instantly falls in love with her. Soon, Romeo speaks to Juliet, and she, too, falls in love with him. They kiss, not even knowing each other's names. When the two find out that they are from opposite sides of the city's largest feud, they are both distraught. Romeo and Juliet are married the next day by Friar Lawrence, who agreed to marry the young lovers in secret hoping that their marriage will end the feud between Capulet and Montague.

The next day, Romeo kills Juliet's cousin, Tybalt, in fury after Tybalt has killed Mercutio. The Prince declares that Romeo will be banished to the city of Mantua for his crime. Friar Lawrence arranges for Romeo to spend his wedding night with Juliet before he has to leave for Mantua the following morning. Lord Capulet pushes ahead with the plan to marry Juliet to Paris. The Friar concocts a plan to reunite Juliet with Romeo in Mantua. The night before her wedding, Juliet must drink a potion that will make her appear to be dead. After she is laid to rest in the family's tomb, the Friar and Romeo will secretly retrieve her, and she will be free to live with Romeo, away from their parents' feuding.

That night, Juliet drinks the potion. The Nurse discovers her, apparently dead, the next morning. Juliet is entombed in the Capulets' family tomb according to plan; however, the message to Romeo explaining the plan never reaches him, and Romeo hears only that Juliet is dead. Rather than live without his true love, Romeo buys a vial of poison and returns to Verona to kill himself at Juliet's tomb. He finds Paris mourning at the tomb and kills him in a fight. Standing by Juliet's body, Romeo drinks the poison, and when Juliet awakens moments later, she sees the body of her beloved Romeo and stabs herself with his dagger. After seeing their children's bodies, Lord Capulet and Lord Montague agree to end their long-standing feud and to raise gold statues in honor of their children in the town square.