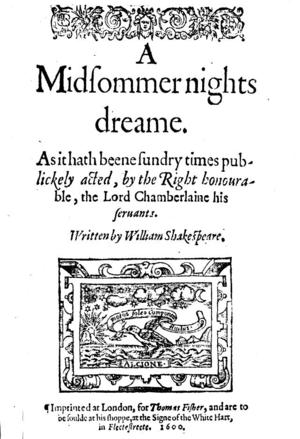 Duke Theseus of Athens, returning from a victory over the Amazons, announces he will marry Hippolyta, the Amazons’ queen in four days’ time. Egeus complains to Theseus that his daughter Hermia refuses to marry Demetrius, the man Egeus has chosen as her husband, because she is in love with Lysander, whom Egeus rejects as a suitor for her. Athenian law means that Hermia must either marry Demetrius or choose between death and becoming a nun. Lysander and Hermia agree to flee Athens through the forest to marry at his aunt’s house. They tell Helena, Hermia’s friend, of their plans. Helena loves Demetrius but he is not remotely interested in her. To try to win Demetrius’ interest, she decides to tell him about the others’ elopement.

Quince, Bottom, Flute, Starveling, Snug, and Snout, a group of Athenian workers, set about organizing their production of a play to be performed at Theseus’ wedding.

In the forest, Oberon, the King of the Fairies, is arguing with Titania, the Fairy Queen, because he demands she should hand over a human orphan boy to him to be his page. To punish Titania for refusing his demand, Oberon orders Robin Goodfellow, the Puck, to bring him a flower whose juice will cause her to fall in love with the first being she sees.

Helena is chasing Demetrius through the woods. Oberon, pitying her plight, orders Puck to anoint Demetrius with the love-juice so that he’ll fall in love with Helena. Oberon then anoints the sleeping Titania with the flower. In the forest, Lysander and Hermia lie down to rest. Puck, thinking Lysander is Demetrius, anoints him with the flower’s juice. Helena appears and awakes Lysander, who immediately falls in love with her and pursues her. Hermia, waking to find her self alone, sets off to find Lysander.

In the forest, the workers arrive to rehearse and to solve their play’s production problems. Puck appears and transforms Bottom, giving him an ass’s head. The other actors flee in terror. Titania awakes and falls in love with Bottom, ordering her fairy servants to attend on him.

Oberon and Puck realize Puck put the love-juice on the wrong human. Oberon tries to remedy this by anointing Demetrius with the flower so that he’ll fall in love with Helena. He does but now both men love Helena, she believes they are teasing her, and Hermia is confused by Lysander’s change of affection. Oberon orders Puck to make a thick fog to separate the four lovers and force them into a deep sleep, so that the confusions can be resolved. Lysander is given the antidote.

When Bottom and Titania fall asleep, Oberon gives Titania the antidote and Puck takes off Bottom’s ass’s head. Oberon and Titania are reconciled.

At dawn, Theseus, Hippolyta, and Egeus arrive in the woods, hunting. They find the lovers who, waking, explain that Demetrius now loves Helena and the two couples are properly sorted out. Theseus overrules Egeus’ demands for the law and approves the matches and a triple wedding. Bottom awakes, dimly remembers the night's events and heads home.

In Athens, after the triple wedding, the aristocrats watch the workers’ play, ‘Pyramus and Thisbe’. At midnight, all leave for bed. The fairies end the play, blessing the marriages.