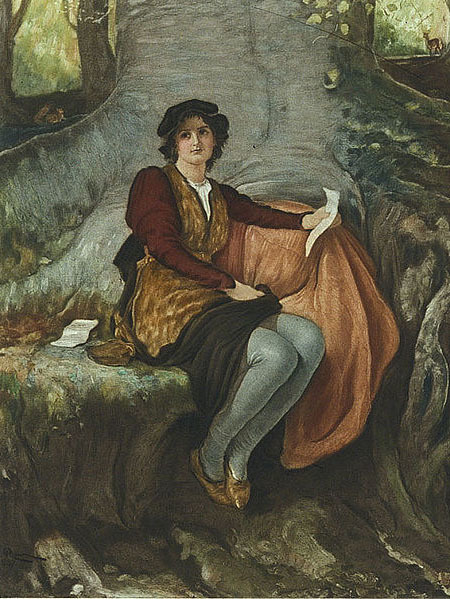 The rightful Duke has been forced into exile from the court by his usurping brother Frederick and has taken refuge in the Forest of Arden with a band of faithful lords. Rosalind, his daughter, is kept uneasily at court as a companion to her cousin Celia, Frederick's daughter.

Orlando de Boys, the youngest son of the late Sir Rowland de Boys, has been kept in poverty by his brother Oliver since his father's death. Orlando decides to wrestle for his fortune at Frederick's court, where he sees Rosalind and they fall in love. Orlando wins the wrestling match.

Duke Frederick banishes Rosalind. Celia, refusing to be parted from her cousin, goes with Rosalind to seek Rosalind’s father in the Forest of Arden. For safety they disguise themselves - Rosalind as the boy Ganymede and Celia as “his” sister Aliena - and persuade the fool Touchstone to accompany them. Once in Arden, “Ganymede” buys the farm belonging to the master of the shepherd Corin.

On hearing of a plot by his brother to kill him, Orlando also flees to Arden with his father’s faithful servant Adam and they take refuge with the exiled Duke. Posting love lyrics to Rosalind through the forest, Orlando encounters Rosalind (who is still disguised as Ganymede). She challenges his love-sick state and suggests that he should prove the strength of his love by wooing Ganymede as if he were Rosalind.

Elsewhere in the forest love also blossoms: the shepherd Silvius suffers unrequited love for Phoebe, who has fallen for Ganymede, while Touchstone is pursuing the goat-herd Audrey.

Oliver, sent into the Forest to hunt down Orlando, has his life saved by his brother, becomes filled with remorse for his past behaviour and falls in love with Aliena.

Frustrated by the pain of his love for Rosalind, Orlando is unable to continue wooing Ganymede, so Ganymede promises he will conjure up the real Rosalind and that all the lovers will finally be wed. But Duke Frederick is leading an army towards the Forest to capture his brother…