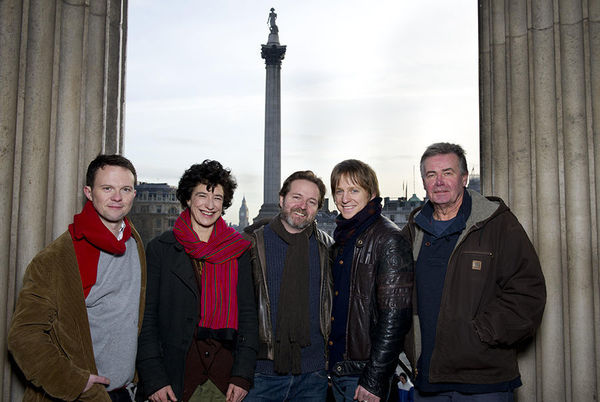 Charles has taught Acting Workshops for Act Up and directed theatre productions for Theatre Clwyd and the London Sitcom Trials. Films include: The King’s Speech, The Spell, The Pharmacist, The Navigators, The Ultimate Truth, and On The Other Hand. Television credits include: Holby City, Scoop, Round The Horne Revisited, Head Over Heels, EastEnders, Poirot, The Hello Girls, Futurecast, and Strickly Chuckle.

Terry Wilton is an AFTLS veteran. He has played and work-shopped Shakespeare across some twenty states in America, many of them several times, and has loved every minute of the experience. On his last tour in 2009 he played Lear in King Lear. He has recently finished playing Baptista, Katherina’s father, in Lucy Bailey’s acclaimed production of The Taming of the Shrew with the Royal Shakespeare Company. Last year he appeared as Duke Frederick and his brother Duke Senior in As You Like It at the Royal Exchange Theatre in Manchester. For the Royal National Theatre he recently played Harry Crookshank in Howard Brenton’s Never So Good.

During a much travelled career, Terry has performed with nearly every major UK theatre company; leading roles in a number of seasons with the RSC; several world tours including Claudius in the Lyubimov Hamlet with the Old Vic company and the British Council, a regular with the Royal Exchange - Enobarbus in Antony and Cleopatra and Kent in King Lear, a number of seasons in Regent’s Park Open Air theatre, a member of Mike Alfred’s Method and Madness company over several years, and many prestigious West End runs. His recent television credits include The Crusades: The Cross and the Crescent, The Forsyte Saga, The Inspector Alleyn Mysteries, and of course Dr. Who.

Andrew Fallaize was educated at Trinity Hall, University of Cambridge. His theatre work most recently includes the highly acclaimed production of J B Priestly’s Cornelius at the Finborough Theatre which is due for a US transfer to off-Broadway during the summer of 2013. Other work includes Home for the Southwark Playhouse, The Spanish Tragedy, Anatol and Venice Preserved– Arcola Theatre, A Midsummer Night’s Dream – Mercury Theatre, Colchester,The Robbers – National Theatre Platform, Measure for Measure – Young Vic Studio, King Lear – English Touring Theatre, Original Sin – Crucible Theatre, The Prince of Homburg – Royal Shakespeare Company and Lyric Theatre, Hammersmith, House/Garden - National Theatre. Other work includes numerous screen roles and regular appearances on BBC Radio 3 and 4 in readings and drama.

Aside from theatre Andrew also works extensively in the field of communications coaching. He also plays the guitar and is learning the accordion.

Shuna Snow studied English Literature at Oxford University before training as an actress at The Poor School in London. She has worked for the Royal Shakespeare Company in Cymbeline, Much Ado About Nothing, Christopher Marlowe’s Dr. Faustus,  and Henrik Ibsen’s Little Eyolf – this contract took her to Stratford-upon-Avon, the Barbican Centre in London, and culminated in performances at Brooklyn Academy of Music in New York City and the Kennedy Center in Washington, D.C.. She has worked in theatres across England including the York Theatre Royal, Manchester Royal Exchange, New Vic Stoke, Oldham Coliseum, Palace Theatre Westcliffe on Sea, Harrogate Theatre Royal, and Southwold Summer Theatre. Plays in London include Welcome to Ramallah, James and Nora, The Charity That Began At Home, and The Magic of Michael MacLiammoir.

Shuna is a member of the Mercury Theatre Company in Colchester where she appeared in The Winter’s Tale, Macbeth, Romeo & Juliet, Julius Caesar, Death of a Salesman, All My Sons, The Triumph of Love, Top Girls, Three Sisters, Uncle Vanya, Betrayal, The Caucasian Chalk Circle, andIphigenia at Aulis. Her association with the Mercury has entailed participation in many theatre workshops, school, and college residencies. She has also worked for BBC Radio Drama and appeared in several TV soap operas.

Pete Ashmore trained at the Royal Scottish Academy of Music and Drama. His theatre credits include Edmund in Mansfield Park at Theatre Royal Bury St. Edmunds, Malcolm in Macbeth at National Theatre Cottelsoe, The Beast/Leo in Beauty and the Beast, Antigonus in The Winter’s Tale, Rodolpho in A View From The Bridge, Lord Cut Glass/Organ Morgan in Under Milk Wood, and Steelforth in David Copperfield at the Mercury Theatre.  Other roles include Shere Khan in The Jungle Book at Lyric Theatre Belfast, Lysander in A Midsummer Night’s Dream, Prince inGrimm Tales at the Library Theatre, and Jamie in Public Property at Hampstead Theatre. He has appeared Off Broadway as Philip Weatherby in Nothing at the E59E59 Theaters.