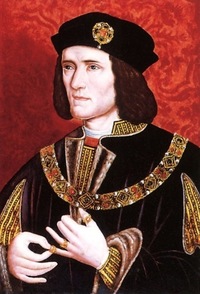 War may be over but Richard, Duke of Gloucester, now plots to make himself king. First, over the corpse of King Henry VI, murdered by Richard, he successfully woos Lady Anne, whose husband he also killed. Next, he arranges for his brother Clarence to be imprisoned in the Tower by their oldest brother, King Edward IV. Clarence is murdered by Richard’s assassins, while Richard delays bringing the king’s pardon. Edward IV, seriously ill, persuades the opposing factions – Richard, Hastings and Buckingham on one side, the Queen’s relatives on the other – to make peace but immediately the King is taken ill and dies, leaving his young son as the new King and Richard as Lord Protector. Richard trumps up treason charges against all who support the young king (including Hastings), leading to their executions, and suggests that the boy-king and his brother, Duke of York stay in the Tower of London. There the boys are murdered by Richard’s hired killer. Buckingham, Richard’s staunchest supporter, helps Richard persuade the citizens of London that Richard should be crowned King. When Buckingham seeks his rewards from the newly-crowned Richard, he is rejected and flees, only to be captured and executed. Seeking to secure his power, Richard has his wife murdered and tries to persuade Edward’s widow to let him marry his niece. She appears to consent but her daughter marries Richmond, who gathers an army against Richard. On the night before the Battle of Bosworth, Richard and Richmond are both visited by the ghosts of Richard’s victims, blessing Richmond and cursing Richard. In the battle Richard is killed and Richmond crowned Henry VII, the first Tudor king.