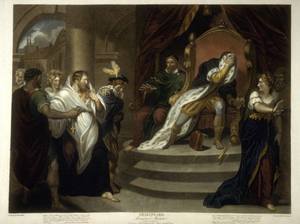 Mysteriously and without explaining his reasons, the Duke of Vienna announces he will leave his city, appointing Angelo as his deputy. Order in the city has suffered from years of lax enforcement of the laws. Angelo, zealous and strict, is the ideal person to reassert the rule of law. The Duke disguises himself as a friar in order to watch what happens. Angelo closes down the brothels and condemns to death Claudio for getting his fiancée Juliet pregnant.  Claudio's sister, Isabella, who is just entering a convent as a novitiate, preparing to become a nun, hears the news from Claudio’s friend Lucio and rushes to plead for her brother's life.  Angelo is moved by her pleas in a way that neither she nor he had expected: he will pardon Claudio if Isabella will have sex with him.  Isabella is horrified. She tells her jailed brother of Angelo’s proposition and is overheard by the Duke in his friar’s disguise who starts a plot to save Claudio and trap Angelo.

The ‘friar’ persuades Isabella to pretend to agree to Angelo's offer; when the moment comes, Mariana, a young woman once engaged to and then rejected by Angelo, takes Isabella's place.  However, Angelo orders that Claudio should be executed anyway. The ‘friar’, without telling Isabella of his plan, persuades the Provost to execute another condemned man, Barnardine, in Claudio's place. When Barnardine inconveniently refuses to be executed, the Provost sends the head of a dead pirate who looks similar enough to Claudio.  The ‘friar’ abandons his disguise and the Duke returns to Vienna.

As the Duke arrives back to take over rule again, Isabella charges Angelo with his abuse of power.  The Duke hands the investigation over to Angelo and leaves. Cornered, Angelo attempts to discredit Isabella. The Duke reveals himself as the friar and condemns Angelo to death. Mariana pleads for Angelo's life and the Duke orders Angelo to marry Mariana. Claudio is revealed to be alive and the Duke ties up loose ends as neatly as he can by proposing marriage to Isabella.